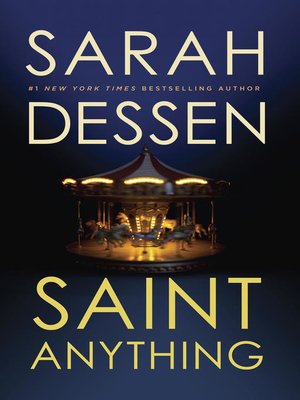 A New York Times bestseller
A TIME Magazine Top 10 Children's Book of 2015
"Saint Anything is a poignant, honest story about how we might suffer the misfortune of someone else's bad choices, how people who love us can become family when we desperately need it, and how starting over might - miraculously - mean taking a solid leap forward." —Jodi Picoult, New York Times bestselling novelist of Leaving Time and My Sister’s Keeper

Sydney has always felt invisible. She's grown accustomed to her brother, Peyton, being the focus of the family’s attention and, lately, concern. Peyton is handsome and charismatic, but seems bent on self-destruction. Now, after a drunk-driving accident that crippled a boy, Peyton’s serving some serious jail time, and Sydney is on her own, questioning her place in the family and the world.
Then she meets the Chatham family. Drawn into their warm, chaotic circle, Sydney experiences unquestioning acceptance for the first time. There’s effervescent Layla, who constantly falls for the wrong guy, Rosie, who’s had her own fall from grace, and Mrs. Chatham, who even though ailing is the heart of the family. But it’s with older brother Mac—quiet, watchful, and protective—that Sydney finally feels seen, really seen, at last.
Saint Anything is Sarah Dessen’s deepest and most psychologically probing novel yet, telling an engrossing story of a girl discovering friendship, love, and herself.