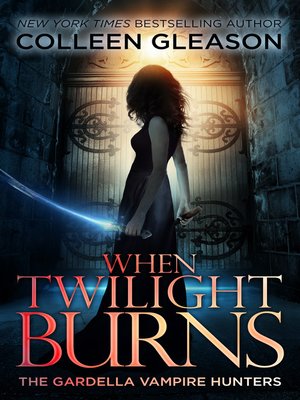 "Buffy the Vampire Slayer meets Jane Austen." –The Book Standard"...Enough dark, angsty touches that I was utterly wrung out by the end. It is also so good I couldn't wait to get online to see when the next in the series will come out." –All About Romance"Gleason's publishing debut...turns vampire stories—and romances—on their ear." –Detroit Free Press

After narrowly escaping from Rome, Lady Victoria Gardella returns to London, where not even sunrise can stop a vampire's carnage...Ruining Victoria's homecoming, a vampire stalks the streets of London—during the daylight. Not only is Victoria unable to detect the vampire with her heightened senses, but she's being framed as the prime suspect behind the killings.

Meanwhile, her heart is still divided between the enigmatic Sebastian Vioget and her fellow slayer Max Pesaro. The battle is made even more difficult by the legacy of a vampire's touch—a vampire who left in Victoria's veins boiling blood that forces her fight evil on two fronts: against the new breed of undead threatening London...and against the darkness within herself.

More about Colleen Gleason
When Twilight Burns
Copy and paste the code into your website.
New here? Learn how to read digital books for free