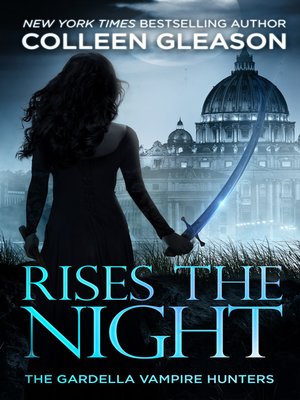 "With its wonderfully witty writing, action-infused plot and sharply defined characters, Rises the Night is deliciously dark and delightfully entertaining." –The Chicago Tribune

The saga of Victoria Gardella continues as the glorious nineteenth-century city of Rome gives rise to a new threat from the immortal undead...Lady Victoria Gardella Grantworth de Lacy has been a vampire slayer for just over a year, balancing her life as a peer of Society with the dangerous role that takes her out on moonlit streets, stake in hand. She has learned brutal and heartbreaking lessons about the sacrifices that must be made in order to save humanity from the evil that secretly preys upon it, but she has not wavered in her vow to fight on.

Now, in Italy, a powerful vampire is amassing the power to control the souls of the dead. As Victoria races across Europe to stop what could be the most deadly army the Gardellas have ever faced, her unlikely companion is Sebastian Vioget—a man as tempting as he is untrustworthy.

But when Victoria discovers she has been betrayed by one of her most trusted allies, the truth will challenge all her powers as a Venator...and as a woman.

"This novel has enough dark, angst touches to it that I was utterly wrung out by the end. It is also so good that I couldn't wait to get online to see when the next in the series will come out...Not for the faint of heart, but the writing is wonderful and the characters really stand out vividly." –All About Romance

The Gardella Vampire Hunters series should be read in order to avoid spoilers.

More about Colleen Gleason
Rises the Night
Copy and paste the code into your website.
New here? Learn how to read digital books for free