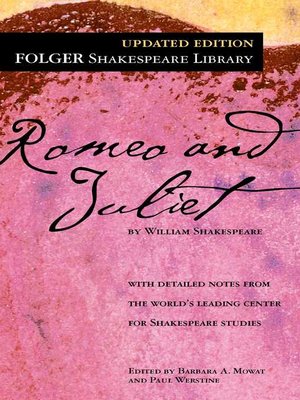 DramaFiction
In Romeo and Juliet, Shakespeare creates a violent world, in which two young people fall in love. It is not simply that their families disapprove; the Montagues and the Capulets are engaged in a blood feud.

In this death-filled setting, the movement from love at first sight to the lovers' final union in death seems almost inevitable. And yet, this play set in an extraordinary world has become the quintessential story of young love. In part because of its exquisite language, it is easy to respond as if it were about all young lovers.

The authoritative edition of Romeo and Juliet from The Folger Shakespeare Library, the trusted and widely used Shakespeare series for students and general readers, includes:

The Folger Shakespeare Library in Washington, DC, is home to the world's largest collection of Shakespeare's printed works, and a magnet for Shakespeare scholars from around the globe. In addition to exhibitions open to the public throughout the year, the Folger offers a full calendar of performances and programs. For more information, visit Folger.edu.
DramaFiction

More about Dr. Barbara A. Mowat

Paul Werstine is Professor of English at the Graduate School and at King's University College at Western University. He is a general editor of the New Variorum Shakespeare and author of Early Modern Playhouse Manuscripts and the Editing of Shakesp...

More about Paul Werstine
Romeo and Juliet
Copy and paste the code into your website.
New here? Learn how to read digital books for free