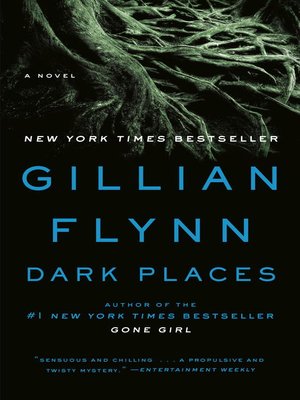 Libby Day was seven when her mother and two sisters were murdered in “The Satan Sacrifice of Kinnakee, Kansas.” She survived—and famously testified that her fifteen-year-old brother, Ben, was the killer. Twenty-five years later, the Kill Club—a secret society obsessed with notorious crimes—locates Libby and pumps her for details. They hope to discover proof that may free Ben.
Libby hopes to turn a profit off her tragic history: She’ll reconnect with the players from that night and report her findings to the club—for a fee. As Libby’s search takes her from shabby Missouri strip clubs to abandoned Oklahoma tourist towns, the unimaginable truth emerges, and Libby finds herself right back where she started—on the run from a killer.
Praise for Dark Places
“[A] nerve-fraying thriller.”—The New York Times
“Flynn’s well-paced story deftly shows the fallibility of memory and the lies a child tells herself to get through a trauma.”—The New Yorker

“Gillian Flynn coolly demolished the notion that little girls are made of sugar and spice in Sharp Objects, her sensuous and chilling first thriller. In Dark Places, her equally sensuous and chilling follow-up, Flynn . . . has conjured up a whole new crew of feral and troubled young females. . . . [A] propulsive and twisty mystery.”—Entertainment Weekly
“Flynn follows her deliciously creepy Sharp Objects with another dark tale . . . The story, alternating between the 1985 murders and the present, has a tense momentum that works beautifully. And when the truth emerges, it’s so macabre not even twisted little Libby Day could see it coming.”—People (4 stars)
“Crackles with peevish energy and corrosive wit.” —Dallas Morning News
“A riveting tale of true horror by a writer who has all the gifts to pull it off.”—Chicago Tribune

"It's Flynn's gift that she can make a caustic, self-loathing, unpleasant protagonist someone you come to root for.”—New York Magazine
“[A] gripping thriller.”—Cosmopolitan
"Gillian Flynn is the real deal, a sharp, acerbic, and compelling storyteller with a knack for the macabre.”—Stephen King