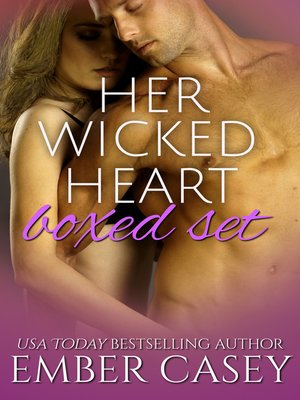 And you thought the Cunninghams couldn't get any more wicked...

You met Calder Cunningham in the first Cunningham Family bundle. Now it's time to meet the other side of the Cunningham family...

This bundle contains:
HER WICKED HEART (Book 3)
Lou just needs someone to take her away. It doesn't matter if she knows his name. Or if he knows hers.

Actually, it's better if he doesn't know hers.

At least that's what she tells herself when she's sticking her tongue down the throat of the sexy handyman she just met at her new job.

Her father's dead. Her family's fortune is gone. And, oh yeah—she's assumed a false identity so she could get a position at Huntington Manor, the luxury tourist attraction that was once her family's estate. Nobody here knows that she's Louisa Cunningham, former heiress and current complicated head case. To them, she's just Addison Thomas, assistant to the hotel's General Manager.

Well, except to handyman Ward Brannon—to him, she's the strange but intoxicating new girl who tried to have sex with him without even knowing his name.

Part One:
Ward Brannon would do anything to protect Louisa Cunningham. No one's ever gotten under his skin the way she has—or inspired such a hunger. But now that he knows the truth about her identity, it's becoming increasingly clear that the two of them are worlds apart. Is their explosive passion enough to hold them together?

Part Two:
Lily Frazer's been through her share of ups and downs with the brooding Calder Cunningham—but she doesn't know where to begin when it comes to his guilt over his sister. She hasn't quite mastered the ability to ease his worries with her body, to make his pain disappear with her lips or hands or softly whispered words, but she's determined to try. Even if it takes all night.

Louisa Cunningham and Ward Brannon are on a mission: to escape the mess (and the families) they left behind.

But life on the road is more difficult than either of them expected. Out here, there might not be any rules, but there are also no longer any secrets... and nowhere to hide from each other.