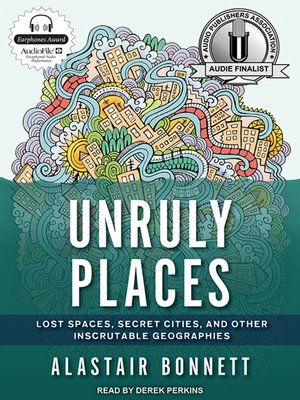 HistorySociologyTravelNonfiction
At a time when Google Maps can take you on a virtual tour of Yosemite's remotest trails and cell phones double as navigational systems, it's hard to imagine there's any uncharted ground left on the planet. In Unruly Places, Alastair Bonnett goes to some of the most unexpected, offbeat places in the world to reinspire our geographical imagination. Bonnett's remarkable tour includes moving villages, secret cities, no man's lands, and floating islands. He explores places as disorienting as Sandy Island, an island included on maps until just two years ago despite the fact that it never existed. An intrepid guide down the road much less traveled, Bonnett reveals that the most extraordinary places on earth might be hidden in plain sight. Perfect for urban explorers, wilderness ramblers, and armchair travelers struck by wanderlust, Unruly Places will change the way you see the places you inhabit.
HistorySociologyTravelNonfiction

Alastair Bonnett is a professor of social geography at Newcastle University. He is the author of several books, including What Is Geography?, How to Argue, Left in the Past, and The Idea of the West. He has also contributed to history and current ...

More about Alastair Bonnett
Unruly Places
Copy and paste the code into your website.
New here? Learn how to read digital books for free