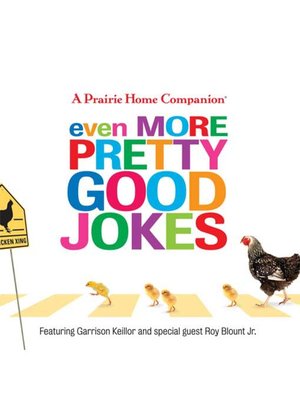 Even more of a good thing: the latest collection of knee-slappers, toe-tappers, and groaners from A Prairie Home Companion Joke Shows.

Did you hear the one about the paranoid dyslexic? He always thought he was following someone. . . . Why did ancient Romans close down the Coliseum? The lions were eating up the prophets. . . .

Jokes are made for sharing, and everyone loves to laugh. This nonstop collection gathers the best jokes from four Joke Shows including the two most recent (3/8/2008 and 11/1/08), all recorded before live audiences at the Fitzgerald Theater in St. Paul. Performers include show regulars—Garrison Keillor, Sue Scott, Tim Russell, Tom Keith—along with special guests. There's music from the Guy's All-Star Shoe Band, a Guy Noir sketch, a Catchup sketch, and an unforgettable performance of "The Sound of Chickens," a song that bears an uncanny resemblance to the Simon & Garfunkel classic "The Sound of Silence." Except it really is about chickens, and while "The Sound of Silence" is dead serious, this version is just plain silly. ("And in the naked light I saw/Ten thousand chickens maybe more.")

So it's everything fans want and expect: good jokes, good music, and a pretty darned good time.