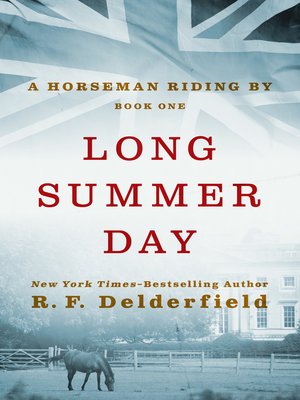 A great read for fans of PBS's Poldark and Downton Abbey—first in the saga of a man returning from battle to an estate in the pre-WWI English countryside.
After serving his country in the Boer War, injured Lieutenant Paul Craddock returns to England to resume civilian life. But things have changed since he joined the Imperial Yeomanry three years ago. His father has died, leaving Paul as heir to a scrap metal business he has no intention of continuing. Instead, he purchases an auctioned-off thirteen-hundred-acre estate in a secluded corner of Devon. Neglected and overgrown, Shallowford becomes the symbol of all that Paul has lost—and a reminder of the gentle place his homeland once was. And here, on this sprawling stretch of land, he will be changed by his love for two women: fiercely independent Grace Lovell, and lovely, demure Claire Derwent.
Set in the English countryside in the first part of the previous century—from the long "Edwardian afternoon" following the death of Queen Victoria, to the gathering storm of World War I—Long Summer Day is the story of a man, his family, and a people struggling to adapt to life in a new world.
Long Summer Day is the first novel in R. F. Delderfield's saga A Horseman Riding By, which continues with Post of Honour and The Green Gauntlet.

R. F. Delderfield (1912–1972) was born in South London. On leaving school he joined the Exmouth Chronicle newspaper as a junior reporter and went on to become editor. He began to write stage plays and then became a highly successful novelist, reno...

More about R. F. Delderfield
Long Summer Day
Copy and paste the code into your website.
New here? Learn how to read digital books for free