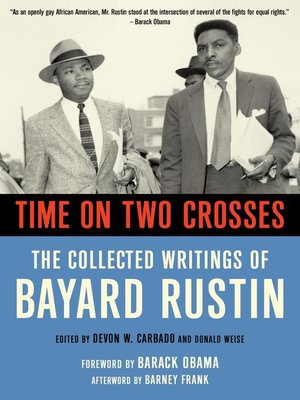 The Collected Writings of Bayard Rustin

Biography & AutobiographyGay/LesbianSociologyNonfiction
In 1956 Bayard Rustin taught Martin Luther King Jr. strategies of nonviolence during the Montgomery Bus Boycott, thereby launching the civil rights movement. Widely acclaimed as a founding father of modern black protest, Rustin reached international notoriety in 1963 as the openly gay organizer of the March on Washington.<BR> <BR>Long before the March on Washington, Rustin&#39;s leadership placed him at the vanguard of social protest. His gay identity, however, became a point of contention with the movement, with the controversy embroiling even King himself.<BR> <BR>Time on Two Crosses offers an insider&#39;s view of many of the defining political moments of our time. From Gandhi&#39;s impact on African Americans, white supremacists in Congress, and the assassination of Malcolm X to Rustin&#39;s never-before-published essays on Louis Farrakhan, affirmative action, and the call for gay rights, Time on Two Crosses chronicles five decades of Rustin&#39;s commitment to justice and equality.
Biography & AutobiographyGay/LesbianSociologyNonfiction

Time on Two Crosses
Copy and paste the code into your website.
New here? Learn how to read digital books for free