ebook ∣ Aboard the Straight Talk Express with John McCain and a Whole Bunch of Actual Reporters, Thinking About Hope 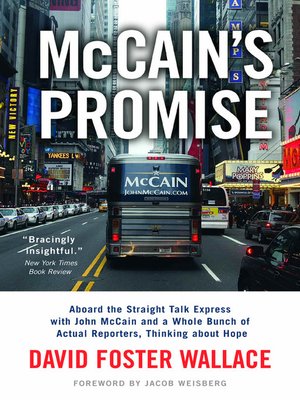 View more libraries...
Is John McCain "For Real?"
That's the question David Foster Wallace set out to explore when he first climbed aboard Senator McCain's campaign caravan in February 2000. It was a moment when Mccain was increasingly perceived as a harbinger of change, the anticandidate whose goal was "to inspire young Americans to devote themselves to causes greater than their own self-interest." And many young Americans were beginning to take notice.
To get at "something riveting and unspinnable and true" about John Mccain, Wallace finds he must pierce the smoke screen of spin doctors and media manipulators. And he succeeds-in a characteristically potent blast of journalistic brio that not only captures the lunatic rough-and-tumble of a presidential campaign but also delivers a compelling inquiry into John McCain himself: the senator, the POW, the campaign finance reformer, the candidate, the man.