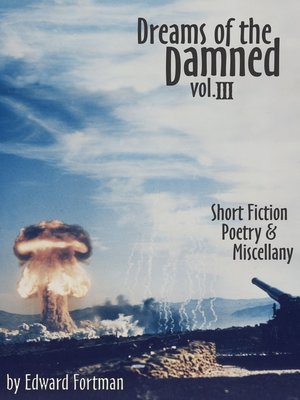 Dreams of the Damned, Volume 3

FantasyFictionHorrorShort Stories
The dark journey moves onward, into and finally through a forest where the trees' roots drink from the blood gathered by a path encrusted with razor-sharp stones. At the end of the forest, we meet, once again, the wretched soul that paints the dreams of the Damned in a whispering voice, full of death. We'll learn of a boy who plays a card game that was invented to see who lives to eat; the legend of a phial whose power is spoken of only on the darkest nights while the children sleep; the silly saga of the folks in Wickersheim, where puerile whippersnappers, old as may be, tug on pant legs, then trod forth with glee; plus, a vision where power stands atop a pedestal, looking down. More visions lie within this tome, painted by that whispering voice, speaking for the Damned, and granting peace to those lost souls.
FantasyFictionHorrorShort Stories

More about Edward Fortman
Dreams of the Damned, Volume 3
Copy and paste the code into your website.
New here? Learn how to read digital books for free