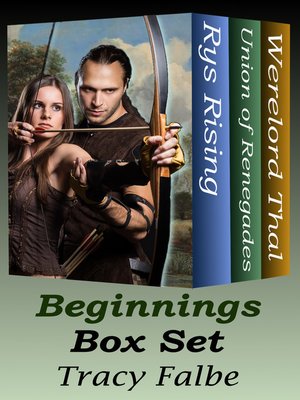 FantasyFictionHistorical Fiction
Beginnings Box Set descriptionEnter Tracy Falbe's fantasy worlds through three different doors. She brings the folklore of Renaissance Bohemia to life in Werelord Thal that can be enjoyed as a stand-alone novel. Then Rys Rising and Union of Renegades begin two series set in the Rys World that she spent 15 years creating. At over half a million words, the Beginnings Box Set offers epic entertainment at a tremendous value.About the novels in this fantasy collection box set:Rys RisingA young warrior ruined and near death is saved by Onja a mysterious rys female. Forsaking all that he was, he will take the name Amar and serve his new magical mistress. A lord among outlaws he will become, feared by kings and called the dro-shalum or curse demon by the common folk. Indulge yourself and read this sumptuous epic told from many angles.Union of RenegadesThe epic begins as Dreibrand Veta and the conquering Horde of the Atrophane Empire reach a mythic Wilderness that beckons with a magical call to glory. But Onja, Queen of the rys, a race far more powerful than the greatest human state, guards this land. She has the power to imprison souls and her genocidal rage is legendary. Everything is at risk for her desperate enemies, the union of renegades.Werelord Thal: A Renaissance Werewolf TaleThal is wanted for Devil worship and shape shifting but still boldly walks the streets of 16th century Prague. Jesuits hunt him. Mercenaries fear him. Musicians sing his praise, and women are captivated by his alpha swagger.
FantasyFictionHistorical Fiction

More about Tracy Falbe
Beginnings Box Set
Copy and paste the code into your website.
New here? Learn how to read digital books for free