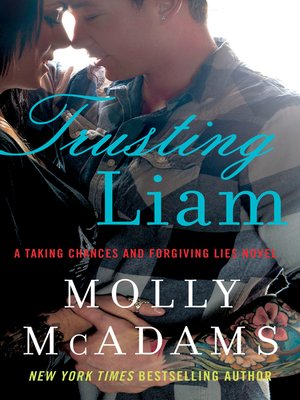 From the New York Times bestselling author of Taking Chances, From Ashes, and Stealing Harper, comes the new unforgettable adult romance Molly McAdams' fans have been waiting for—the sizzling story of a young woman who must place her trust in the one man who can break through her defenses.

A night they will always remember...a connection neither can deny...a secret that could destroy it all...

When Kennedy Ryan moves to California, she never expects to come face-to-face with Liam Taylor—the intriguing man who has haunted her thoughts for a year. A man who led her to breaking every one of her rules for a single night of passion that ended up meaning more than it was ever supposed to. Accustomed to disastrous experiences with men, Kennedy shields herself before he can break down more of the carefully built control she's clung to for the last four years. But every time she sees Liam, she feels her resolve weakening.

Liam Taylor has been asked to help socialize his boss's nieces. But what he thinks sounds more like a babysitting job ends up leading him to the only girl who ever slipped away before morning—a girl he thought he'd never find again. And now that she's within reach, Liam's determined to never let her go.

But when a secret from her past tests their relationship, will they be able to cling to the trust Liam has worked so hard to build?

Molly McAdams grew up in California but now lives in the oh-so-amazing state of Texas with her husband and furry four-legged daughters. Her hobbies include hiking, snowboarding, traveling, and long walks on the beach . . . which roughly translates...

More about Molly McAdams
Trusting Liam
Copy and paste the code into your website.
New here? Learn how to read digital books for free