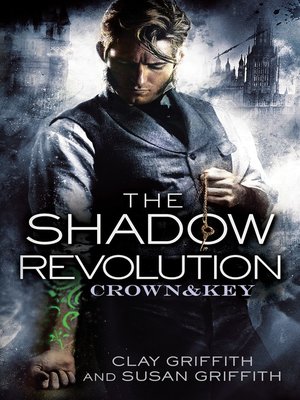 They are the realm's last, best defense against supernatural evil. But they're going to need a lot more silver.

As fog descends, obscuring the gas lamps of Victorian London, werewolves prowl the shadows of back alleys. But they have infiltrated the inner circles of upper-crust society as well. Only a handful of specially gifted practitioners are equipped to battle the beasts. Among them are the roguish Simon Archer, who conceals his powers as a spell-casting scribe behind the smooth veneer of a dashing playboy; his layabout mentor, Nick Barker, who prefers a good pub to thrilling heroics; and the self-possessed alchemist Kate Anstruther, who is equally at home in a ballroom as she is on a battlefield.

After a lycanthrope targets Kate's vulnerable younger sister, the three join forces with fierce Scottish monster-hunter Malcolm MacFarlane—but quickly discover they're dealing with a threat far greater than anything they ever imagined.
Praise for The Shadow Revolution

"A fast-paced, action-filled dark fantasy that is just sheer fun to read . . . The Shadow Revolution kicks off the Crown & Key series in spectacular fashion!"—Fresh Fiction

"A thrilling read! Clay and Susan Griffith have crafted a gritty, action-packed Victorian-era fantasy world full of dark creatures, mystery, and magic—a must read for steampunk fans!"—Shawntelle Madison, author of the Coveted series

"What happens when you kick off a new urban fantasy series with a fantastic setting and unique characters, and you throw in some dangerous, supernatural creatures, evil madmen, murder and mayhem? You get a kick-ass book to read. . . . I want more, please!"—Book Swoon

"If summer blockbuster action movies existed back in the Victorian era, they would look a lot like The Shadow Revolution. This book doesn't mess around. . . . Highly recommended."—The BiblioSanctum

"One hell of a read . . . [With] unforgettable characters and magic around every bend, this truly was a breath of fresh air."—My Guilty Obsession

"The story is pretty fast-paced, the mystery intriguing and refreshingly surprising, and the action thrilling. [The Shadow Revolution] pulls you in and barely lets you up for air, and I love the intensity of that kind of storytelling."—Refracted Light

"So good that I won't be surprised if this book series is opted to be a TV show or movie with an accompanying video game! Great storytelling, great plot and most of all great book!"—Marienela
From the Paperback edition.
FantasyFictionScience FictionHistorical Fiction

Clay Griffith and Susan Griffith met at a bookstore thanks to The Uncanny X-Men #201. They had to get married because of a love of adventure stories with heroes who save the day and fall in love. Soon they were writing stories together, including ...

More about Clay Griffith
The Shadow Revolution
Copy and paste the code into your website.
New here? Learn how to read digital books for free