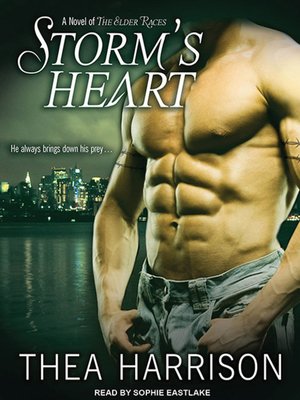 FantasyFictionLiteratureRomance
During the rule of her murderous Dark Fae uncle, Thistle "Tricks" Periwinkle found sanctuary among the Wyr in New York. Her ethereal beauty and sparkling personality won the hearts of the public, but after her uncle's death, there are those who don't want to see her ascend to the throne. Able to wield thunder and lightning, Wyr sentinel Tiago Black Eagle has ruled the skies for centuries. His massive build and thunderous power make him one of the Wyr's best weapons. And he's sent to protect Tricks when she's almost assassinated in Chicago. Soon, both Tiago and Tricks will fall prey to the stormy hunger that engulfs them-a passion that will shake the very foundation of all the worlds.
FantasyFictionLiteratureRomance

More about Thea Harrison
Storm's Heart
Copy and paste the code into your website.
New here? Learn how to read digital books for free