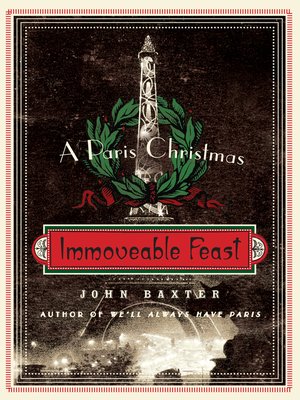 A witty cultural and culinary education, Immoveable Feast is the charming, funny, and improbable tale of how a man who was raised on white bread—and didn't speak a word of French—unexpectedly ended up with the sacred duty of preparing the annual Christmas dinner for a venerable Parisian family.

Ernest Hemingway called Paris "a moveable feast"—a city ready to embrace you at any time in life. For Los Angeles–based film critic John Baxter, that moment came when he fell in love with a French woman and impulsively moved to Paris to marry her. As a test of his love, his skeptical in-laws charged him with cooking the next Christmas banquet—for eighteen people in their ancestral country home. Baxter's memoir of his yearlong quest takes readers along his misadventures and delicious triumphs as he visits the farthest corners of France in search of the country's best recipes and ingredients. Irresistible and fascinating, Immoveable Feast is a warmhearted tale of good food, romance, family, and the Christmas spirit, Parisian style.

John Baxter has lived in Paris for more than twenty years. He is the author of four acclaimed memoirs about his life in France: The Perfect Meal: In Search of the Lost Tastes of France; The Most Beautiful Walk in the World: A Pedestrian in Paris; ...

More about John Baxter
Immoveable Feast
Copy and paste the code into your website.
New here? Learn how to read digital books for free