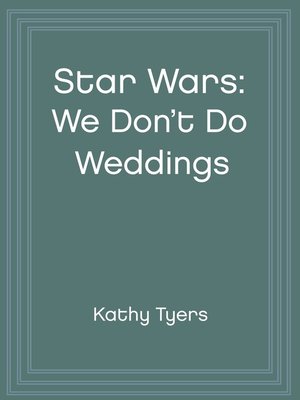 We Don't Do Weddings

A Selection from 'Tales from the Mos Eisley Cantina' · Star Wars: Tales

FictionScience FictionShort StoriesThriller
Nothing has stirred the world's imagination like the Star Wars "RM" trilogy of films. Now, go beyond the scope of the trilogy, delving into stories that don't end with the credits, and thrill to the further adventures of the wild and wooly characters from the famous Mos Eisley cantina scene in the original Star Wars "RM" film. This dramatic, digitally produced audio recording, loaded with original Star Wars music and full-stereo sound effects, brings the otherworldly outposts visited by the likes of Luke Skywalker, Han Solo, Darth Vader, and Jabba the Hutt vividly and unforgettably to life.
We Don't do Weddings
The Band's Tale
Figrin Da'n and the Modal Nodes, bopping Bithians, members in good standing of the Intergalactic Federation of Musicians, were under exclusive contract to Jabba's Palace. They were hoofing it up when Jabba's arch rival sent E522, a recycled assassin droid, to make them an offer they couldn't refuse.
Figrin Da'n didn't do weddings. But Lady Valerian had imported herself a Whipid mate from her homeworld and was dead set on getting hitched in high style. And what with Figrin Da'n's gambling debts, three thousand credits could set him up just fine. But before they could cut the cake, Lady Val's bounty hunter bridegroom took Jabba's bait, skipped town to find Han Solo, and the party exploded into murderous mayhem.
This exclusive Star Wars "RM" audio dramatization features a wall-to-wall mix of densely interwoven environmental sounds, and authentic Star Wars "RM" special effects. Scored with John Williams' original Star Wars "RM" music and Bith band compositions, We Don't Do Weddings makes for truly out-of-this-world listening entertainment.
From the Cassette edition.
FictionScience FictionShort StoriesThriller

Kathy Tyers, author of the New York Times bestselling Star Wars: The Truce at Bakura, has contributed several other stories to the Star Wars universe, including We Don't Do Weddings: The Band's Tale, and A Time to Mourn, a Time to Dance: Oola's Ta...

More about Kathy Tyers
We Don't Do Weddings
Copy and paste the code into your website.
New here? Learn how to read digital books for free