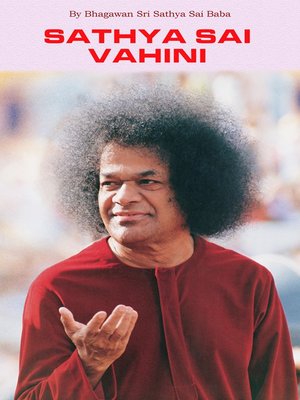 Religion & SpiritualityNonfiction
Bhagawan has announced Himself as the Divine Teacher of Truth, Beauty, and Goodness. By precept and example, through His writings and discourses, letters and conversations, He has been instilling the supreme wisdom and instructing all mankind to translate it into righteous living, inner peace, and universal love. When the Ramakatha Rasavahini, the uniquely authentic, nectarine stream of the Rama's story, was serialised in full in the Sanathana Sarathi, Bhagawan blessed readers with a new series, which He named Bharatiya Paramartha Vahini (The Stream of Indian Spiritual Values). While these precious essays, on the basic truths that foster and feed Indian culture since ages before history began, were being published, Bhagawan decided to continue the flow of illumination and instruction under a more comprehensive and meaningful name, Sathya Sai Vahini - the Ganga from the Lotus Feet of the Lord - "The Flow of Divine Sai Grace". This book, therefore, contains the two Vahinis that have merged in one master stream.Inaugurating these series, Bhagawan wrote for publication in the Sanathana Sarathi, "Moved by the urge to cool the heat of conflict and to quench the agonising thirst for 'knowledge about yourself' that you are afflicted with, see, here it comes, the Sathya Sai Vahini, wave behind wave, with the Sanathana Sarathi as the medium between you and Me." With infinite compassion, this Sathya Sai incarnation of the Omniwill is giving millions of persons in all lands freedom from disease, distress, and despair, narcotics, narcissism, and nihilism. He is encouraging those, who suffer gloom through wilful blindness, to light the Lamp of Love in order to see the world and the Lamp of Wisdom to see themselves. "This is a tantalising, true-false world. Its apparent diversity is an illusion. It is One, but is cognised by the maimed, multiple vision of humans as Many," says Bhagawan. This book is the twin Lamp He has devised for us.
Religion & SpiritualityNonfiction

Sri Sathya Sai Baba was born as Sathyanarayana Raju on November 23rd, 1926 in the village of Puttaparthi, in the state of Andhra Pradesh in South India. Even as a child, His spiritual inclination and contemplative nature set Him apart from other c...