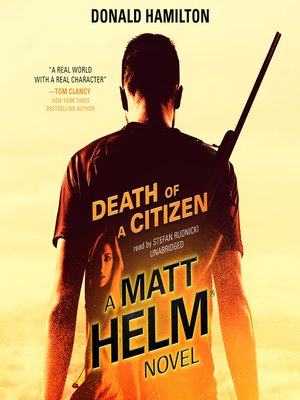 Death of a Citizen

The first installment in the legendary Matt Helm thrillers

Matt Helm, one-time special agent for the American government during the Second World War, has left behind his violent past to raise a family in Santa Fe, New Mexico. When a former colleague turns rogue and kidnaps his daughter, Helm is forced to return to his former life as a deadly and relentless assassin.

Originally released in the era of the James Bond novels, the Matt Helm novels were considered grittier and more realistic than Bond, garnering them critical praise and an ardent audience.

Donald Hamilton (1916–2006) was the creator of Matt Helm, star of twenty-seven novels that have sold more than twenty million copies worldwide. He was born in Uppsala, Sweden, attended the University of Chicago, and served in the US Naval Reserve....

Stefan Rudnicki first became involved with audiobooks in 1994. Now a Grammy-winning audiobook producer, he has worked on more than two thousand audiobooks as a narrator, writer, producer, or director. He has narrated more than three hundred audiob...

More about Cassandra de Cuir
Death of a Citizen
Copy and paste the code into your website.
New here? Learn how to read digital books for free