Our Roots Run Deep as Ironweed

ebook ∣ Appalachian Women and the Fight for Environmental Justice 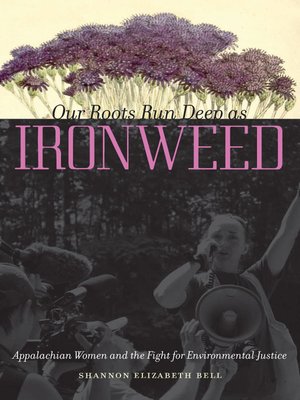 Motivated by a deeply rooted sense of place and community, Appalachian women have long fought against the damaging effects of industrialization. In this collection of interviews, sociologist Shannon Elizabeth Bell presents the voices of twelve Central Appalachian women, environmental justice activists fighting against mountaintop removal mining and its devastating effects on public health, regional ecology, and community well-being.

Each woman narrates her own personal story of injustice and tells how that experience led her to activism. The interviews—many of them illustrated by the women's "photostories"—describe obstacles, losses, and tragedies. But they also tell of new communities and personal transformations catalyzed through activism. Bell supplements each narrative with careful notes that aid the reader while amplifying the power and flow of the activists' stories. Bell's analysis outlines the relationship between Appalachian women's activism and the gendered responsibilities they feel within their families and communities. Ultimately, Bell argues that these women draw upon a broader "protector identity" that both encompasses and extends the identity of motherhood that has often been associated with grassroots women's activism. As protectors, the women challenge dominant Appalachian gender expectations and guard not only their families but also their homeplaces, their communities, their heritage, and the endangered mountains that surround them.

30% of the proceeds from the sale of this book will be donated to organizations fighting for environmental justice in Central Appalachia.

Cover Title Page Copyright Page Contents Acknowledgments List of Figures Introduction 1. "How Can They Expect Me as a Mother to Look Over That?": Maria Gunnoe's Fight for Her Chilcren's Health and Safety 2. "We Became Two Determined Women": Pauline Canterberry and Mary Miller Become the Sylvester Dustbusters 3. "Let Us Live in Our Mountains": Joan Linville's Fight for her Homeland 4. "You Gotta Go and Do Everything You Can—Fight for Your Kids": Donetta Blankenship Speaks Out against Underground Slurry Injections 5. "It's Just a Part of Who I Am": Maria Lambert and the Movement for Clean Water in Prenter 6. "I'm Not an Activist against Coal; I'm an Activist for the Preservation of My State": Teri Blanton and the Fight for Justice in Kentucky 7. "I'm Not Going to Be Run Out, I'm Not Going to Be Run Over, I'm Not Going Out without a Fight": Patty Sebok's Battle against Monster Coal Trucks 8. "Our Roots Run So Deep, You Can't Distinguish Us from the Earth We Live On": Debbie Jarrell and the Campaign to Move Marsh Fork Elementary School 9. "It's Not Just What I Choose to Do, It's Also, I Think, What I Have to Do": Lorelei Scarboro's Drive to Save Coal River Mountain 10. "Money Cannot Recreate What Nature Gives You": Donna Branham's Struggle against Mountaintop Removal 11. "I Want My Great-Great Grandchildren to Be Able to Live on the Earth!": The Legacy of the Courageous Julia "Judy" Bonds 12. Conclusion Notes References Index|