Diary of a Stinky Dead Kid 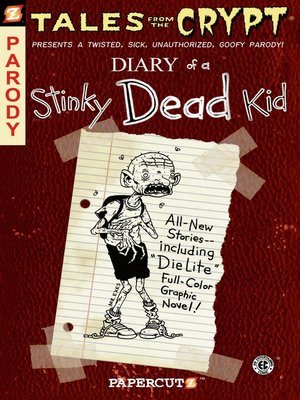 Tales from the Crypt Graphic Novel

The Ghoulunatics – The Vault-Keeper, the Old Witch, and everyone's favorite, The Crypt-Keeper are back to offer their twisted takes on "Diary of a Wimpy Kid," the "Twilight"series, and Guitar Hero! The cover-featured Stinky Dead Kid stars in two tales - - one that explains exactly how he became a Stinky Dead Kid, and another in which he battles "Guitar Demon," a popular musical toy that's become possessed by an evil entity. There's also the trenchant tale of teen love involving a girl and a vampire, "Dielite," and the riotous return of the ever-doomed Thomas Donnelly in his most bizarre tale yet!

Tales from the Crypt Graphic Novel