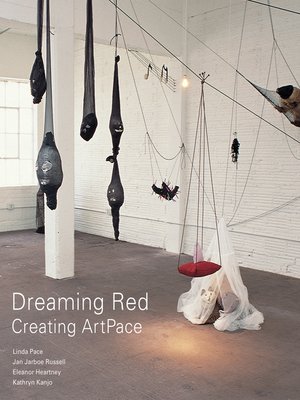 Since its founding in 1993 by the late Pace Foods heiress Linda Pace, Artpace has become one of the premiere foundations for contemporary art. An artist residency program based in San Antonio, Texas, Artpace's goal is to give artists time and space in which to imagine new ways to work. Each year, nine artists (three from Texas, three from other areas of the United States and three from abroad) are invited to the foundation to create new work. Selected by guest curators the likes of Robert Storr and Okwui Enwezor, the list of artists who have undertaken residencies at ArtPace is impressive, prescient and diverse, including Felix Gonzalez-Torres, Annette Messager, Tracey Moffatt, Xu Bing, Nancy Rubins, Cornelia Parker, Inigo Manglano-Ovalle, Glenn Ligon, Kendell Geers, Carolee Schneemann, Mona Hatoum, Isaac Julien, Arturo Herrera, and Christian Jankowski.
Dreaming Red includes illustrations of all the works created at ArtPace since its inception, an essay by art historian Eleanor Heartney, short essays on selected artists by the guest curators, including Cuauhtémoc Medina, Lynne Cooke, Chrissie Iles and Judith Russi Kirshner, and a lengthy essay on the personal history of the foundation and its founder.