ebook ∣ The Royal We 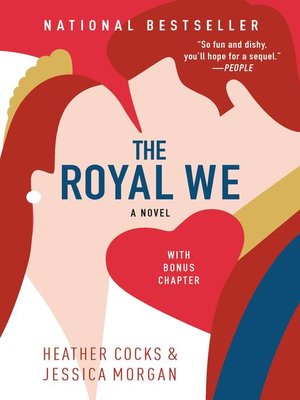 View more libraries...
An American girl finds her prince in this "fun and dishy" (People) royal romance inspired by Prince William and Kate Middleton.
American Bex Porter was never one for fairy tales. Her twin sister Lacey was always the romantic, the one who daydreamed of being a princess. But it's adventure-seeking Bex who goes to Oxford and meets dreamy Nick across the hall - and Bex who finds herself accidentally in love with the heir to the British throne.
Nick is wonderful, but he comes with unimaginable baggage: a complicated family, hysterical tabloids tracking his every move, and a public that expected its future king to marry a Brit. On the eve of the most talked-about wedding of the century, Bex looks back on how much she's had to give up for true love... and exactly whose heart she may yet have to break.
Praise for The Royal We
"Hysterical" — Entertainment Weekly
"Full of love and humor, and delicious in too many ways." — Emma Straub, New York Times bestselling author
"Engrossing and deeply satisfying." — Jen Doll, author of Save the Date