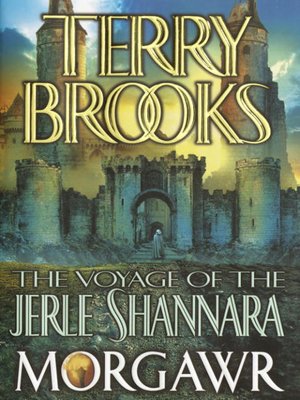 FantasyFictionScience FictionThriller
"The action is fast and furious . . . A fitting conclusion to one trilogy and a promising taking-off point for another."—Booklist
Harrowing confrontations with the merciless Ilse Witch and the monstrous Antrax have taken their toll on the intrepid heroes aboard the airship Jerle Shannara. But their darkest adversary now snaps at their heels, in the form of the Morgawr—feeder upon the souls of his enemies and centuries-old sorcerer of unimaginable might with a fleet of airships and a crew of walking dead men at his command. The Morgawr's goal is twofold: find and control the fabled ancient books of magic and destroy the dark disciple who betrayed him—the Ilse Witch. Now at the mercy of those who seek vengeance against her, the Ilse Witch's only protector is her long-lost brother, Bek Ohmsford, who is determined to redeem his beloved sister . . . and to fulfill her destiny.
BONUS: This edition contains an excerpt from Terry Brooks's The Measure of the Magic.

"If you love Terry Brooks, you must have this book."—Statesman Journal
"Excellent. . . . It lives up to its predecessors, both within this trilogy and outside it."—Contra Costa Times
FantasyFictionScience FictionThriller

More about Terry Brooks
Morgawr
Copy and paste the code into your website.
New here? Learn how to read digital books for free