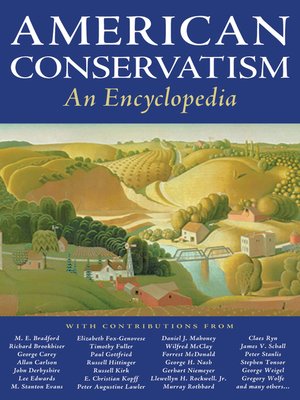 View more libraries...
"A must-own title." —National Review Online
American Conservatism: An Encyclopedia is the first comprehensive reference volume to cover what is surely the most influential political and intellectual movement of the past half century. More than fifteen years in the making—and more than half a million words in length—this informative and entertaining encyclopedia contains substantive entries on those persons, events, organizations, and concepts of major importance to postwar American conservatism. Its contributors include iconic patriarchs of the conservative and libertarian movements, celebrated scholars, well-known authors, and influential movement activists and leaders.
Ranging from "abortion" to "Zoll, Donald Atwell," and written from viewpoints as various as those which have informed the postwar conservative movement itself, the encyclopedia's more than 600 entries will orient readers of all kinds to the people and ideas that have given shape to contemporary American conservatism. This long-awaited volume is not to be missed.