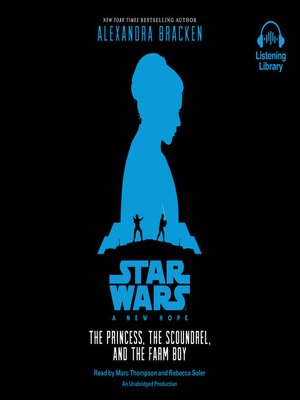 A New Hope: The Princess, the Scoundrel, and the Farm Boy

Juvenile FictionScience FictionThriller
The galaxy is at war.
Although the Rebel Alliance has won a few battles against the Empire, hope is fading. The Empire is about to finish building the greatest weapon the galaxy has ever seen-the Death Star. The rebels' only chance to defeat it now lies in the unlikely hands of a princess, a scoundrel, and a farm boy. . . .
Acclaimed, New York Times bestselling author Alexandra Bracken delivers a captivating retelling of Star Wars: A New Hope like you've never experienced before. Since the premier of the original film, Princess Leia, Han Solo, and Luke Skywalker have become iconic, larger-than-life characters. The Princess, the Scoundrel, and the Farm Boy takes a deeper look at these three heroes as they join forces to defeat the evil that threatens their entire galaxy.
Juvenile FictionScience FictionThriller

Alexandra Bracken is the New York Times bestselling author of The Darkest Minds and Never Fade. Born and raised in Arizona, she moved east to study history and English at the College of William & Mary in Virginia. Alex now lives in New York City, ...

More about Alexandra Bracken
A New Hope: The Princess, the Scoundrel, and the Farm Boy
Copy and paste the code into your website.
New here? Learn how to read digital books for free