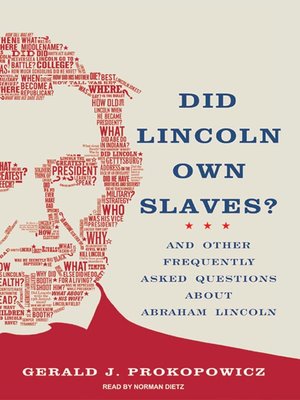 Did Lincoln Own Slaves?

And Other Frequently Asked Questions about Abraham Lincoln

Our most revered president gets a unique and uniquely engaging biography fashioned from the answers to the most frequent---and most unusual and surprising---questions asked about Abraham Lincoln.

What kind of law did Lincoln practice? Did he imprison his political enemies? What was it in his youth that put him on the path to greatness? These are some of the hundreds of questions that Gerald J. Prokopowicz was asked most often during the nine years he served as scholar-in-residence at the Lincoln Museum in Fort Wayne, Indiana. In this book, he organizes the questions along the timeline of Lincoln's life to give us a portrait of the sixteenth president unlike any we have had before.

The questions range far and wide in subject matter and seriousness. Some are inspired by recent reinterpretations of Lincoln's actions (Was he a racist?), and some delve into what previous generations considered inappropriate (Was he gay?). Some are products of scholarly investigation (If he were alive today, could he get elected?), and others of idle curiosity (What were his favorite foods?). Some are drawn from today's headlines (Did his presidential actions violate the Constitution?), and others from today's tabloids (Did doctors really raise him from the dead?). Prokopowicz's authoritative, often surprising responses illuminate facets of Abraham Lincoln's life, work, and legacy about which people remain endlesly curious.

Gerald J. Prokopowicz teaches American and public history at East Carolina University and is the author of All for the Regiment: The Army of the Ohio, 1861-1862.

More about Gerald J. Prokopowicz
Did Lincoln Own Slaves?
Copy and paste the code into your website.
New here? Learn how to read digital books for free