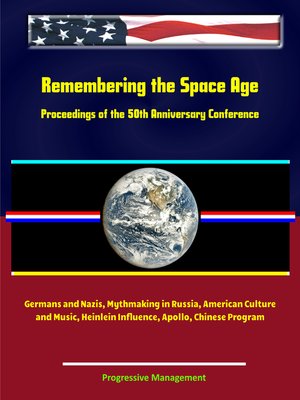 This official NASA history document - converted for accurate flowing-text ebook format reproduction - contains twenty-one essays by noted experts on the history of the space age, with an eclectic selection of fascinating topics ranging from the effect of spaceflight on American music and culture to the role of Nazi Germans in the early days of the program.

After 50 years of robotic and human spaceflight, and as serious plans are being implemented to return humans to the Moon and continue on to Mars, it is a good time to step back and ask questions that those in the heat of battle have had but little time to ask. What has the Space Age meant? What if the Space Age had never occurred? Has it been, and is it still, important for a creative society to explore space? How do we, and how should we, remember the Space Age?

It is with such questions in mind that the NASA History Division and the National Air and Space Museum Space History Division convened a conference on October 22-23, 2007, to contemplate some of the large questions associated with space exploration over the last half century. The conference was designed to discuss not so much the details of what has happened in space over the last 50 years, nor even so much the impact of what has happened, but rather its meaning in the broadest sense of the term. In doing so, the organizers made a conscious attempt to draw in scholars...