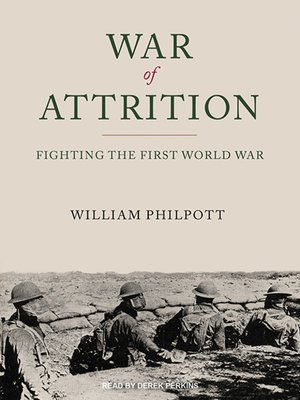 HistoryMilitaryNonfiction
The Great War of 1914-1918 was the first mass conflict to fully mobilize the resources of industrial powers against one another, resulting in a brutal, bloody, protracted war of attrition between the world's great economies. Now, one hundred years after the first guns of August rang out on the Western front, historian William Philpott reexamines the causes and lingering effects of the first truly modern war. Drawing on the experience of front-line soldiers, munitions workers, politicians, and diplomats, War of Attrition explains for the first time why and how this new type of conflict was fought as it was fought, as well as how the attitudes and actions of political and military leaders, and the willing responses of their peoples, stamped the twentieth century with unprecedented carnage on-and behind-the battlefield.
HistoryMilitaryNonfiction

William Philpott is a professor of the history of warfare in the Department of War Studies at King's College, London. A specialist in the operations on the Western Front, he has published extensively on the subject and is the author of the award-w...

More about William Philpott
War of Attrition
Copy and paste the code into your website.
New here? Learn how to read digital books for free