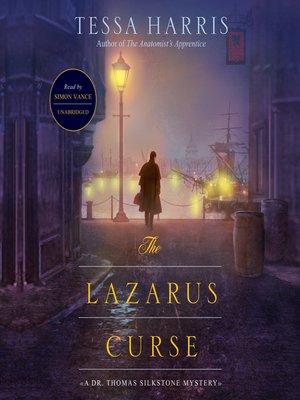 London, 1782. The sole survivor of an ill-fated expedition to Jamaica has gone missing upon his return home. Dr. Thomas Silkstone had been entrusted to catalog all the New World specimens and therefore feels compelled to investigate the disappearance. Meanwhile, a rumor circulates that a potion with the power to raise the dead is afoot, and the formula is thought to be in the missing botanist's journal.

As he investigates, the good doctor is drawn into a world of trafficking in corpses for profit. When a headless corpse is discovered, Silkstone uncovers the sinister motives of those who would stop at nothing to possess the Lazarus potion.

Tessa Harris, an English author born in Lincolnshire, holds a history degree from Oxford University. After four years of working with local newspapers, she set her sights on women's magazines. She is regularly heard on local BBC radio and over the...

More about Tessa Harris
The Lazarus Curse
Copy and paste the code into your website.
New here? Learn how to read digital books for free