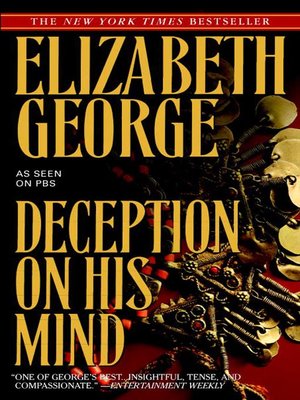 Deception on His Mind

FictionMysterySuspense
NEW YORK TIMES BESTSELLER • "One of George's best . . . insightful, tense, and compassionate."—Entertainment Weekly
Balford-le-Nez is a dying seaside town on the coast of Essex. But when a member of the town's small but growing Asian community is found murdered near its beach, the sleepy town ignites. Intrigued by the involvement of her London neighbor—Taymullah Azhar—in what appears to be a growing racial conflagration, Detective Sergeant Barbara Havers arranges to have herself assigned to the investigation. Setting out on her own, this is one case Havers will have to solve without her longtime partner, Detective Inspector Thomas Lynley— and it's one of the toughest she's ever encountered. For Havers must probe not only the mind of a murderer and her emotional response to a case unsettlingly close to her own heart, but also the terrible price people pay for deceiving others . . . and themselves.
Praise for Deception on His Mind
"So much fun to read, it's criminal."—Newsday
"It's tough to resist the pull of George's storytelling once hooked."—USA Today

"Falls smartly into place in [George's] literate, impassioned series, one of today's best."—Chicago Tribune
"Fascinating . . . there are wrenching stories here, and George conveys them with exceptional grace."—People
FictionMysterySuspense

More about Elizabeth George
Deception on His Mind
Copy and paste the code into your website.
New here? Learn how to read digital books for free