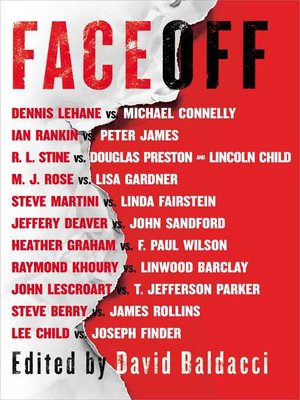 FictionShort StoriesSuspenseThriller
A New York Times and USA TODAY bestseller! Edited by #1 New York Times bestselling author David Baldacci and including stories by Michael Connelly, Lee Child, Jeffery Deaver, and more, this one-of-a-kind anthology pulls together the most beloved characters from the best and most popular thriller series today. Worlds collide!
In an unprecedented collaboration, twenty-three of the world's bestselling and critically acclaimed thriller writers have paired their series characters—such as Harry Bosch, Jack Reacher, and Lincoln Rhyme—in an eleven-story anthology curated by the International Thriller Writers (ITW). All of the contributors to FaceOff are ITW members and the stories feature these dynamic duos:

Lisa Gardner is the #1 New York Times and internationally bestselling author of more than twenty novels, including seven thrillers in the D.D. Warren series. With more than twenty-two million books in print, she is published in thirty countries an...

John Sandford is the author of twenty-four Prey novels; the Virgil Flowers novels, most recently Storm Front; and six other books. He lives in New Mexico.

Michael Connelly is the author of the recent #1 New York Times bestsellers The Drop, The Fifth Witness, The Reversal, The Scarecrow, The Brass Verdict, and The Lincoln Lawyer, as well as the bestselling Harry Bosch series of novels. He is a former...

Jeffery Deaver is the international, #1 bestselling author of more than twenty-seven suspense novels, including The Bone Collector, which was made into a film starring Denzel Washington. He lives in North Carolina.

Steve Berry is the New York Times and #1 internationally bestselling author of The Patriot Threat, The Lincoln Myth, The King's Deception, The Columbus Affair, The Jefferson Key, The Emperor's Tomb, The Paris Vendetta, The Charlemagne Pursuit, The...

Dennis Lehane is the author of ten novels, including the New York Times bestsellers Gone, Baby, Gone; Mystic River; Shutter Island; The Given Day; Moonlight Mile; and Live by Night, as well as Coronado, a collection of short stories and a play. He...

FaceOff
Copy and paste the code into your website.
New here? Learn how to read digital books for free