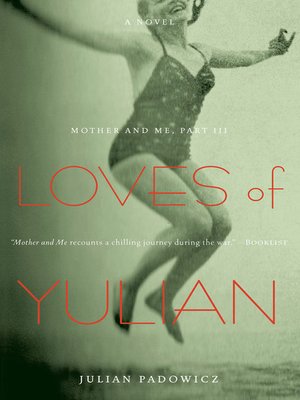 Mother and Me, Part III

Loves of Yulian is the poignant conclusion to the three-part memoir recounting the author's harrowing WWII escape from occupied Poland to America. After fleeing over the Carpathian Mountains into Hungary, eight-year-old Yulian and his resourceful but self-involved mother, Barbara, are on board a ship to Rio de Janeiro to await their turn for immigration to the United States. A former Warsaw socialite, Barbara has no marketable skills, only her looks, wits and courage. Paying their way by selling the diamonds she had concealed in her clothing, they land in Brazil with only the diamond engagement ring on her finger. Somehow, it must finance both their stay and eventual passage to New York.

Yulian, a sensitive Jewish boy raised by an overprotective, devoutly Catholic nanny, has difficulty interacting with other children and concludes that God is punishing him for abandoning Judaism. Complicating matters, he falls in love with a beautiful, but significantly older, fellow refugee, Irenka, who has been hired to take him to the beach. When his mother meets a man she truly cares for, Yulian hopes he has finally found his long-sought-after father figure. But Barbara's European upper-class values clash with her suitor's Latin ardor, leaving Yulian in the middle of a misaligned courtship, which he desperately wants to set right.

Eventually, Yulian resolves his spiritual issues with the help of a celebrated Polish poet and his own teddy bear. His ambitious mother, however, must choose between a man she truly loves and her future in America.

Julian Padowicz holds a degree in English Literature from Colgate University. He has been a documentary filmmaker and producer of audio tapes for most of his adult life, and has won a Golden Eagle Award for his educational film, The People Shop, f...

More about Julian Padowicz
Loves of Yulian
Copy and paste the code into your website.
New here? Learn how to read digital books for free