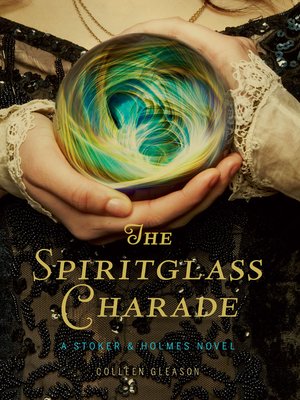 MysterySuspenseHistorical FictionYoung Adult Fiction
Evaline Stoker and Mina Holmes never meant to get into the family business. But when you're the sister of Bram and the niece of Sherlock, vampire hunting and mystery solving are in your blood, so to speak.
After the Affair of the Clockwork Scarab, Evaline Stoker and Mina Holmes are eager to help Princess Alix with a new case. Seventeen-year-old Willa Aston is obsessed with spiritual mediums, convinced she is speaking with her mother from beyond the grave. What seems like a case of spiritualist fraud quickly devolves into something far more menacing: someone is trying to make Willa appear lunatic using an innocent-looking spiritglass to control her. The list of clues piles up: an unexpected murder, a gang of pickpockets, and the return of vampires to London. But are these events connected?
As Uncle Sherlock would say, there are no coincidences. It will take all of Mina's wit and Evaline's muscle to keep London's sinister underground at bay.
MysterySuspenseHistorical FictionYoung Adult Fiction

Colleen Gleason is the author of the Gardella Vampire Chronicles, a paranormal romance series, and the Regency Draculia, a postapocalyptic romance series. Stoker & Holmes is her first series for young adults. She lives in Michigan.

More about Colleen Gleason
The Spiritglass Charade
Copy and paste the code into your website.
New here? Learn how to read digital books for free