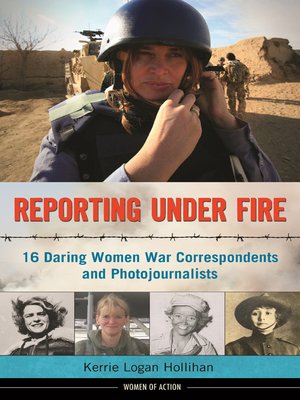 The tremendous struggles women have faced as war correspondents and photojournalists

A profile of 16 courageous women, Reporting Under Fire tells the story of journalists who risked their lives to bring back scoops from the front lines. Each woman—including Sigrid Schultz, who broadcast news via radio from Berlin on the eve of the Second World War; Margaret Bourke-White, who rode with General George Patton's Third Army and brought back the first horrific photos of the Buchenwald concentration camp; and Marguerite Higgins, who typed stories while riding in the front seat of an American jeep that was fleeing the North Korean Army—experiences her own journey, both personally and professionally, and each draws her own conclusions. Yet without exception, these war correspondents share a singular ambition: to answer an inner call driving them to witness war firsthand, and to share what they learn via words or images.

Kerrie Logan Hollihan is the author of Elizabeth I, The People's Queen; Isaac Newton and Physics for Kids; Rightfully Ours; and Theodore Roosevelt for Kids. She has written for Bird Watcher's Digest and Boy's Life. She lives in Blue Ash, Ohio.

More about Kerrie Logan Hollihan
Reporting Under Fire
Copy and paste the code into your website.
New here? Learn how to read digital books for free