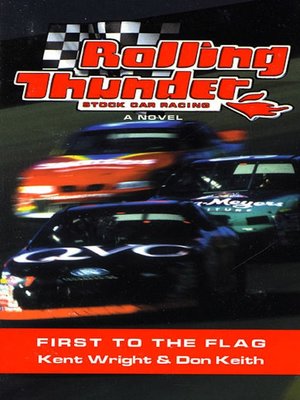 First to the Flag

The pedal meets the metal in Rolling Thunder Stock Car Racing—the thrilling series that traces the history of stock car racing from the dusty dirt tracks of East Tennessee to the multi-million-dollar, high-tech venues of today.

In the 200-mile-per-hour world of championship stock car racing, if you aren't the first man to the flag, all the talent and promise in the world ain't worth a bucket of spit.
"Rocket Rob" Wilder is everything the fans and those inside big-time car racing knew he could be: daring, polished, talented, and a sure threat to win. His meteoric rise to the top of the tough Grand National division, as well as his thrilling, crowd-pleasing showdowns with some of the other young racers, promise even more success. But you can't bake a pie with nothing but promise. In order to prove he really is the real deal, Wilder is going to have to make the jump into the big league. And that means racing—and beating—the likes of Dale Earnhardt, Mark Martin, and Jeff Gordon.
Does the Rocket have what it takes?
First to the Flag by Kent Wright and Don Keith continues the saga of the men who risk it all to be the first under the checkered flag.

Don Keith is an Alabama native and attended the University of Alabama in Tuscaloosa where he received his degree in broadcast and film. He has won numerous awards from the Associated Press and United Press International for news writing and report...

More about Kent Wright
First to the Flag
Copy and paste the code into your website.
New here? Learn how to read digital books for free