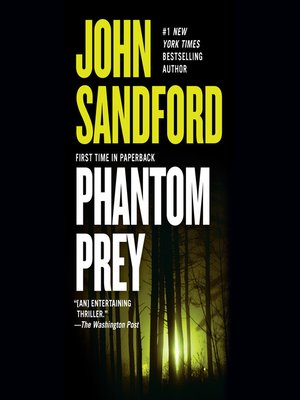 FictionThriller
"Chalk up another winner for [John Sandford] and his all-too-human hero" (Richmond Times-Dispatch) in the #1 New York Times bestselling Prey series.
After one troubled college-age student disappears and two are found slashed to death, Lucas Davenport finds himself hunting what appears to be a modern-day Jack the Ripper. Unfortunately the clues aren't adding up—and then there's the young Goth girl who keeps appearing and disappearing. Where does she come from? Where does she go every night? And why does Lucas keep getting the sneaking suspicion that there is something else going on here? Something very bad, very dark, and as elusive as a phantom...
FictionThriller

John Sandford is the pseudonym of Pulitzer Prize–winning journalist John Camp. He is the author of the Prey novels, the Kidd novels, the Virgil Flowers novels, The Night Crew, and Dead Watch. He lives in New Mexico.

More about John Sandford
Phantom Prey
Copy and paste the code into your website.
New here? Learn how to read digital books for free