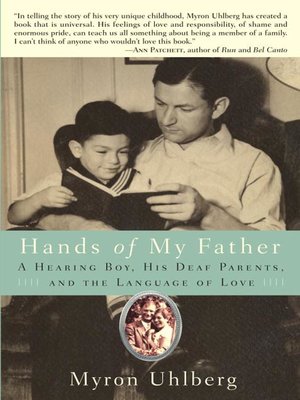 Hands of My Father

A Hearing Boy, His Deaf Parents, and the Language of Love

By turns heart-tugging and hilarious, Myron Uhlberg's memoir tells the story of growing up as the hearing son of deaf parents--and his life in a world that he found unaccountably beautiful, even as he longed to escape it.

"Does sound have rhythm?" my father asked. "Does it rise and fall like the ocean? Does it come and go like the wind?"

Such were the kinds of questions that Myron Uhlberg's deaf father asked him from earliest childhood, in his eternal quest to decipher, and to understand, the elusive nature of sound. Quite a challenge for a young boy, and one of many he would face.

Uhlberg's first language was American Sign Language, the first sign he learned: "I love you." But his second language was spoken English--and no sooner did he learn it than he was called upon to act as his father's ears and mouth in the stores and streets of the neighborhood beyond their silent apartment in Brooklyn.

Resentful as he sometimes was of the heavy burdens heaped on his small shoulders, he nonetheless adored his parents, who passed on to him their own passionate engagement with life. These two remarkable people married and had children at the absolute bottom of the Great Depression--an expression of extraordinary optimism, and typical of the joy and resilience they were able to summon at even the darkest of times.

From the beaches of Coney Island to Ebbets Field, where he watches his father's hero Jackie Robinson play ball, from the branch library above the local Chinese restaurant where the odor of chow mein rose from the pages of the books he devoured to the hospital ward where he visits his polio-afflicted friend, this is a memoir filled with stories about growing up not just as the child of two deaf people but as a book-loving, mischief-making, tree-climbing kid during the remarkably eventful period that spanned the Depression, the War, and the early fifties.

Myron Uhlberg is the critically acclaimed and award-winning author of a number of children's books. He lives with his wife in Santa Monica and Palm Springs.From the Hardcover...

More about Myron Uhlberg
Hands of My Father
Copy and paste the code into your website.
New here? Learn how to read digital books for free