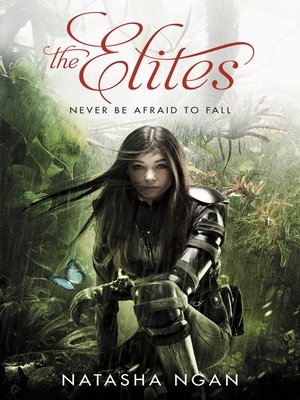 There is a rumour that the Elites don't bleed.'

Hundreds of years into the future, wars, riots, resource crises and rising sea-levels have destroyed the old civilisations. Only one city has survived: Neo-Babel, a city full of cultures - and racial tension. Fifteen-year-old Silver is an Elite, a citizen of Neo-Babel chosen to guard the city due to her superior DNA. She'd never dream of leaving - but then she fails to prevent the assassination of Neo Babel's president, setting off a chain of events more shocking and devastating than she could ever have imagined. Forced to flee the city with her best friend Butterfly (a boy with genetically-enhanced wings), Silver will have to fight to find her family, uncover the truth about Neo-Babel and come to terms with her complicated feelings for Butterfly.

Packed full of adventure, romance, exoticism and the power of friendship, THE ELITES is a highly compelling and beautifully written novel from a supremely talented debut author.

ABOUT THE AUTHORNatasha Ngan was born in St Albans, Hertfordshire, and spent her childhood in both the UK and Malaysia, where the Chinese side of her family is from. She also spent it living in two other worlds - reality, and her imagination. As an only child, books were her best friends, and though she now has real, physical, human friends, books are still every bit as important to her.

Natasha has always (only) wanted to be an author. THE ELITES is her first novel, and she regularly blogs about her experiences of being a debut author. Outside of writing YA fiction, Natasha works as a freelance social media consultant and runs a fashion and photography blog with her boyfriend Callum (www.girlinthelens.com). Follow Natasha at: http://natashangan.com or on Twitter: @girlinthelens