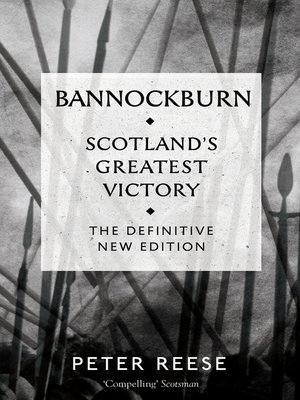 "An admirably vivid account of the Scots' greatest victory over the English": the 14th century Battle of Bannockburn (The Scotsman, UK).

Scotland, 1314. On a marsh-fringed plain south of Stirling Castle, King Robert the Bruce led the Scottish army in a singularly devastating victory over the English. Bannockburn was Scotland's greatest battlefield triumph in the First War of Scottish Independence, achieved against great odds by a combination of brilliant tactical leadership and the fatal overconfidence of the English King, Edward II.

Peter Reese's definitive history shines a spotlight on this pivotal moment in Scottish History and considers the wider implications of this momentous victory. It is "a cracker of a book, which reads like a novel yet has the authority of many a weightier tome" (Sunday Herald, UK).

"The measured, precise build-up makes the final eruption of violence all the more compelling and impresses upon the reader just how much was at stake on the battlefield of Bannockburn in the summer of 1314."—The Scotsman, UK