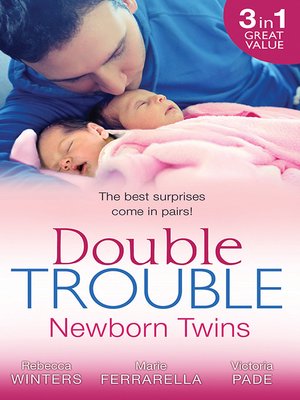 Gabi Turner is on the Greek island of Milos to find Andreas Simonides––the father of her late sister's baby twins.CEO Andreas is more comfortable chartering his yacht than pushing a pram. But he knows who the real daddy is––his brother

Waiting for his brother to arrive, Andreas is soon changing nappies and singing nursery rhymes. Andreas thinks he and Gabi make a good team, but what will keep them together when the twins are reunited with their father?

Who do those precious abandoned twin babies belong to, and what were they doing on Hannah Brady's doorstep? And just what, exactly, is going on between the lovely day care owner and pediatrician Jackson Caldwell?

Rumours abound that Hannah and Jackson were more than just friends years ago. But then why did she marry his closest pal? And why did Jackson hightail it out of town after her wedding? Guess the paternity of the twins isn't the only secret in Storkville, folks!

Babies In The Bargain – Victoria Pade

A newspaper article brought Kira Wentworth to Montana in the hopes of reuniting with her long–lost sister. But Cutty Grant and his tragic news dashed her dreams and compelled her to stay.

But Kira saw that Cutty was also in need of a kind heart and a helping hand – for his young twins were running circles around the single dad. So, Kira stepped in and put her own spin on 'nanny hood', making a permanent impression on Cutty's fragile soul...

Double Trouble
Copy and paste the code into your website.
New here? Learn how to read digital books for free