The Tainted Trial of Farah Jama 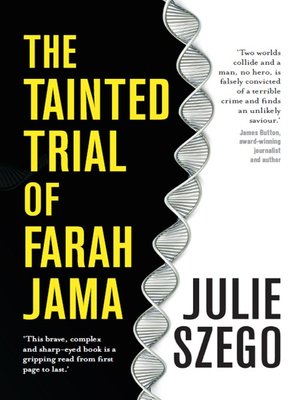 It began to gnaw at him, at first an inkling, then an obsession: Farah Jama was truly innocent. Sonnet (Associate Crown Prosecutor) decided then that he didn't want to grant Jama a re-trial. He wanted to deliver him an acquittal'. How did a young Somali man end up in gaol for the rape of a woman he had never met, in an over-28s nightclub he was too young to be admitted to, in a Melbourne suburb he had never visited? In the style of literary non-fiction comes a gripping true story that will appeal to mystery, crime and CSI aficionados and anyone interested in justice for all, in the midst of cultural diversity. In 2009, nearly 18 months after Jama's incarceration, his conviction was overturned when a mother's profound faith in her son's innocence, a defence lawyer's belief in his client and a prosecutor's tenacious pursuit of truth and justice brought forth revelations that overturned a shocking miscarriage of justice. Written by journalist and former lawyer, Julie Szego, The Tainted Trial of Farah Jama is an intriguing and confronting story about injustice, the heartache of migration and the trials of integration, cultural taboos, prejudice and gender politics.

'A brilliant chronicle that tells us simple justice is rarely simple—and takes the shine off the smugness of forensic evidence, like DNA-testing'. —Prof. Colin Tatz AO

'A fascinating account of what can go wrong if the presumption of innocence is just a catch-cry. This book shows how dangerous it is when DNA evidence is allowed to trump common sense. I did not know of this trial until I read the book: I could not wait to find out how it went so wrong. The DNA evidence made no sense; the verdict seemed irrational. The result was a terrible injustice. To everyone'. —Julian Burnside AO QC, barrister, human rights and refugee advocate, and author

'High quality journalism may have fallen away in our newspapers, but Julie Szego demonstrates its enduring vitality in this story of a grievous injustice redressed. She reveals in painstaking detail not only the various factors that, together, resulted in Farah Jama's conviction for rape, but also the complexity of his Somali culture striving to assert itself on Australia's multi-cultural stage. This is a book that deserves a very long shelf-life'. —Robert Hillman, award-winning biographer and fiction writer

'Two worlds collide and a man, no hero, is falsely convicted of a terrible crime and finds an unlikely saviour'. —James Button, award-winning journalist and author

'Unputdownable. A shocking true-life story that reads like a nightmare dreamt up by Kafka; a complex, cautionary tale that should be required reading for all law students, forensic scientists, and police cadets'. —Peter Goldsworthy AM, award-winning writer and poet