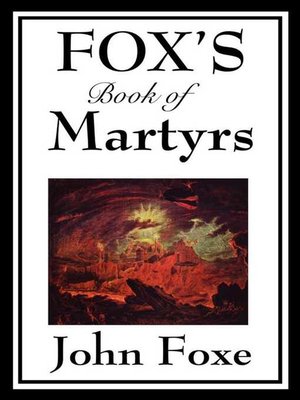 View more libraries...
Published early in the reign of Queen Elizabeth I of England, only five years after the death of the Roman Catholic Queen Mary, the work is an affirmation of the Protestant Reformation in England during the ongoing period of religious conflict between Catholics and Protestants. Since the English monarchs also asserted control over the Church in England, a change in rulers could change the legal status of religious practices. As a consequence, adherents of one religion risked judicial execution by the State depending on the attitudes of the rulers. During Mary's reign, common people of Christian faith were publicly burned at the stake in an attempt to eliminate dissension from Catholic doctrines.

Foxe's account of Mary's reign and the martyrdoms that took place during it contributed very significantly to the belief in a distinction from the Roman Catholic Church and the Pope as a central aspect of English national identity. By compiling his record, Foxe intended to demonstrate a historical justification for the foundation of the Church of England as a contemporary embodiment of the true and faithful church, rather than as a newly established Christian denomination.