Robert the Bruce, King of Scots 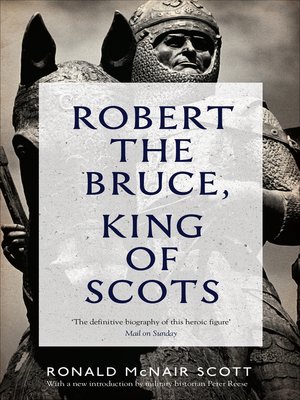 "A heroic biography of one of Scotland's legendary leaders, by a British novelist and former literary critic for the London Sunday Times" (Kirkus).

Robert the Bruce had himself crowned King of Scots at Scone on a frozen March morning in 1306. After years of struggle, Scotland had been reduced to a vassal state by Edward I of England. Its people lived in abject poverty. But on the day he seized the crown, Bruce renewed the fight for Scotland's freedom, and let forth a battle cry that would echo through the centuries.

Using contemporary accounts, Ronald McNair Scott tells the story of Scotland's legendary 14th century leader, and one of Europe's most remarkable medieval kings. From Bruce's historic victory against England in the Battle of Bannockburn to the day in 1324 when the Pope recognized him as king of an independent Scotland, this is a story of a man whose life shaped a nation.
"A thundering good narrative ... splendidly told."—Sunday Telegraph, UK