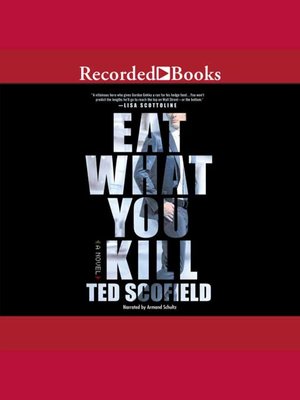 Eat What You Kill

In Eat What You Kill by Ted Scofield, Evan Stoess is a struggling young Wall Street analyst obsessed with fortune and fame. A trailer park kid who attended an exclusive prep school through a lucky twist of fate, Evan' s unusual past leaves him an alien in both worlds, an outsider who desperately wants to belong. When a small stock he discovers becomes an overnight sensation, he is poised to make millions and land the girl of his dreams, but disaster strikes and he loses everything.

Two years later a mysterious firm offers Evan a chance for redemption, and he jumps at the opportunity. His new job is to short stocks— to bet against the market. But when the stock goes up and he finds himself on the brink of ruin once again, another option presents itself: murder. At a moral crossroads, Evan must ask himself— how far will a man go for money and vengeance?

Eat What You Kill
Copy and paste the code into your website.
New here? Learn how to read digital books for free