The Light of Love 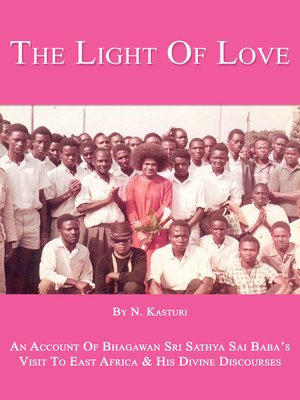 Responding to the yearnings of the people of East Africa for His grace, Bhagawan Sri Sathya Sai Baba made a divine visit to that place by leaving Mumbai on 30th June, 1968. Sri. N. Kasturi, who was one of the fortunate few to have basked in His divine sunshine during that visit, has brought out this booklet, 'The Light Of Love', in two parts.

In the first part, he has given a vivid narration of the places graced by Bhagawan, covering the whole tour, starting from the gathering at Mumbai airport, on 30th June, 1968, till Bhagawan's return on 15th June, 1968, before an assembly of 20,000 eagerly awaiting devotees, including Dr. K. M. Munshi, at the same airport. The author has narrated the tour in such a way that the reader can have the feeling of having visited the places with Bhagawan. The author has also given a couple of responses received from the people of that region, after the return of Bhagawan, to show how Bhagawan's divine visit had impressed that people of East Africa.

The second part consists of seven discourses that Bhagawan gave in Nairobi, Kampala and one interactive session with the fortunate lawyers, doctors, Rotarians, and Lion club members of that place and during which Bhagawan was kind enough to answer and clear their doubts.