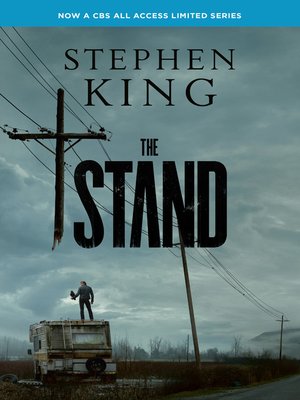 FictionHorrorSuspenseThriller
Stephen King's apocalyptic vision of a world blasted by plague and tangled in an elemental struggle between good and evil remains as riveting and eerily plausible as when it was first published.
Soon to be a television series

A patient escapes from a biological testing facility, unknowingly carrying a deadly weapon: a mutated strain of super-flu that will wipe out 99 percent of the world's population within a few weeks. Those who remain are scared, bewildered, and in need of a leader. Two emerge—Mother Abagail, the benevolent 108-year-old woman who urges them to build a peaceful community in Boulder, Colorado; and Randall Flagg, the nefarious "Dark Man," who delights in chaos and violence. As the dark man and the peaceful woman gather power, the survivors will have to choose between them—and ultimately decide the fate of all humanity.
(This edition includes all of the new and restored material first published in The Stand: The Complete And Uncut Edition.)
FictionHorrorSuspenseThriller

Stephen King is the author of more than fifty books, all of them worldwide bestsellers. Among his most recent are Full Dark, No Stars; Under the Dome; Just After Sunset; Duma Key; Lisey's Story; Cell; and the last three novels in the Dark Tower sa...

More about Stephen King
The Stand
Copy and paste the code into your website.
New here? Learn how to read digital books for free