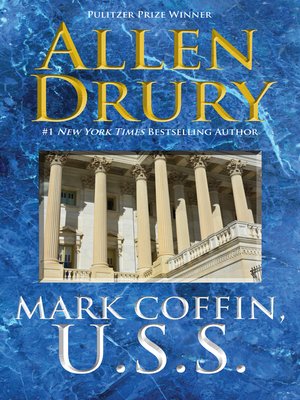 The epic story of a Senator's rise and fall. Mark Coffin of California was barely thirty years old when he won a startling upset victory in his race for a seat in the U.S. Senate. A bright, handsome, energetic idealist with a passion for decency in government, he thought his honesty and dedication would see him through anything.

But Washington, DC, was all too eager to teach him the hard lessons of gamesmanship and compromise. Neither Mark Coffin nor his wife were prepared for what Washington had in store for them: the bizarre sex scandal that would threaten to destroy not only Mark Coffin's career and his personal life, but all of the political reforms he was fighting so desperately to achieve.

Mark Coffin, U.S.S. is a magnificent novel of Washington politics—an insider's view of power at the top, shown through the eyes of vivid, fascinating, and humanly likable characters.

From Allen Drury, the master of spellbinding political fiction, author of Advise and Consent.

Mark Coffin, U.S.S.
Copy and paste the code into your website.
New here? Learn how to read digital books for free