An Empire on the Edge 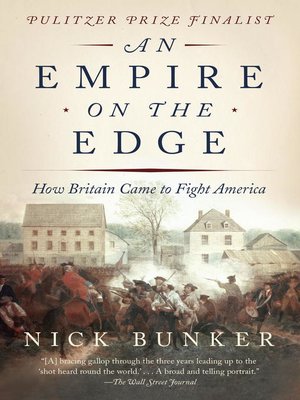 Written from a strikingly fresh perspective, this new account of the Boston Tea Party and the origins of the American Revolution shows how a lethal blend of politics, personalities, and economics led to a war that few people welcomed but nobody could prevent.

In this powerful but fair-minded narrative, British author Nick Bunker tells the story of the last three years of mutual embitterment that preceded the outbreak of America’s war for independence in 1775. It was a tragedy of errors, in which both sides shared responsibility for a conflict that cost the lives of at least twenty thousand Britons and a still larger number of Americans. The British and the colonists failed to see how swiftly they were drifting toward violence until the process had gone beyond the point of no return.

At the heart of the book lies the Boston Tea Party, an event that arose from fundamental flaws in the way the British managed their affairs. By the early 1770s, Great Britain had become a nation addicted to financial speculation, led by a political elite beset by internal rivalry and increasingly baffled by a changing world. When the East India Company came close to collapse, it patched together a rescue plan whose disastrous side effect was the destruction of the tea.

With lawyers in London calling the Tea Party treason, and with hawks in Parliament crying out for revenge, the British opted for punitive reprisals without foreseeing the resistance they would arouse. For their part, Americans underestimated Britain’s determination not to give way. By the late summer of 1774, when the rebels in New England began to arm themselves, the descent into war had become irreversible.

Drawing on careful study of primary sources from Britain and the United States, An Empire on the Edge sheds new light on the Tea Party’s origins and on the roles of such familiar characters as Benjamin Franklin, John Hancock, and Thomas Hutchinson. The book shows how the king’s chief minister, Lord North, found himself driven down the road to bloodshed. At his side was Lord Dartmouth, the colonial secretary, an evangelical Christian renowned for his benevolence. In a story filled with painful ironies, perhaps the saddest was this: that Dartmouth, a man who loved peace, had to write the dispatch that sent the British army out to fight.